Mesa County, Colorado has been operating their composting site for more than two decades now. Founded as a means to divert standard yard and landscape waste from the landfill, the community has been steadily leaning on their expertise over the years to accommodate more and more organic material. Now that the comfort level with recycling green waste has settled in, the potential to begin diverting food waste and a range of other organic waste streams is now being seriously considered. 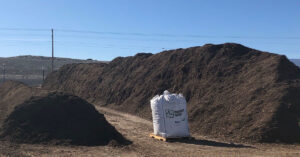 Just a short year or two ago that path was not quite as clear. Jennifer Richardson is the director of the county’s Solid Waste and Sustainability Division, and has been overseeing the compost operation for several years. She’s the first to appreciate just how far Mesa County has come.

“We’ve invited the community to drop off green waste here at no charge for almost twenty years, so our source has been quite constant,” she explains. “Anything from a whole tree, to logs less than six feet long and two feet in diameter, to yard waste. We also get some bedding, a little manure, some whole fruit too because we’re in an ag area. The beginning was quite a bit of trial and error to find the recipe that works for us, but we eventually found a routine that satisfied our needs.”

This being canyon country, the land is mostly arid. Source material leans heavily toward carbon as lush green lawns and gardens are much less common in commercial and residential landscapes.

“Not so much grass,” Jennifer continues. “Mostly shrubs and stuff. Such high carbon content is challenging in a composting process because it slows down or stops the biological process and you end up with a high content of overs in your final screening.”

When Jennifer first stepped into the director role in Mesa County back in 2018, she attended a composting seminar to better familiarize herself with the process. Overseeing the compost site is far from her only responsibility, and she admits she had little experience with the operations.

“I came in with a strong compliance background, but didn’t have a good understanding of the actual process. How and why it works, how changes in the variables affect changes to the outcomes. I came away with a much better awareness for the important balance of carbon, nitrogen, air and water required in a healthy compost recipe and a newfound appreciation for the real biological nature of the process.”

It’s All About the Biology

It was the same seminar where she became aware of Harvest Quest.

“The seminar was hosted by Bob Yost from A1 Organics, and he was a real proponent of the Harvest Quest inoculant and methodology,” shares Jennifer. “It was something that immediately caught my attention because of the space and time constraints we’re always faced with on our site. The biology in the Harvest Quest inoculant really made sense for the challenges we faced.”

Mesa County has 11 acres dedicated to their compost site. In a typical year, they were able to generate two cycles of compost albeit with a high overs content after each finishing run. Jennifer knew that was not an ideal result and wanted to find a way to improve on that outcome.

“Harvest Quest really seemed to be a solution for what we were trying to achieve,” she recalls. “We had a huge curing pile that was taking six months or more to finish. We were adding urea to our compost because of our lacking nitrogen content. We were getting higher ammonia generation because of the addition of urea. And our overs were too high because the biology in our compost was shutting down too soon to decompose everything thoroughly.”

A Total Transformation of Process

After sharing the Harvest Quest potential with her compost operations team, a pilot program was set up to study the process and test the results. Which were astounding. The Harvest Quest inoculant introduced colonies of microbes that better attacked the carbon in their pile and with some slight recipe and timing changes, their outcomes dramatically improved. In late 2019, the new methodology was introduced across their full site. 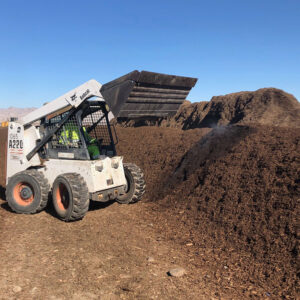 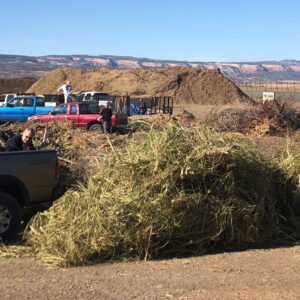 “We’ve been really pleased!” Jennifer says enthusiastically. “Harvest Quest definitely sped up our process, almost too fast really. What took six months to produce good compost before we can now do in just two months. The analyticals and pathogens in our sampling have been great. The turnaround for us is amazing.”

Tweaks to the process are still ongoing.

“Our ammonias after two months were a tad high in that first batch, so the compost is slightly immature still. Recommendations from Harvest Quest and the USCC are to just let it sit in a curing pile a little longer, so we’re letting it go another month before we screen. But the finished product looks so good and our overs have gone way down.”

Roughly a year into their new process methodology with Harvest Quest, Mesa County is beginning to explore an expansion of organic intake to begin diverting waste from other areas of the community.

“There is a push towards food waste now,” adds Jennifer. “We’ll need more space to do it right, but with the changes made to the process last year we did add enough capacity to consider starting a food waste pilot program soon.”

The county is in discussions with Colorado to permit some land west of the landfill for a new compost pad.

“The new space would make such a difference. Our waste water treatment facility is also inquiring about having us compost biosolids. It was something that was first tried about ten years ago but with minimal success and the community wasn’t behind it. But we know how to handle it now and I think the public recognizes it so it’s probably time to look into that again too.” 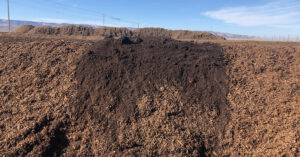 The Mesa County compost site is an operation of need. It was created as a means of keeping material out of the landfill and it continues to satisfy that need. As a result, they have pursued growth as necessary, but are not actively seeking growth.

“We basically make five products,” Jennifer clarifies. “We have an ultra fine, which is just composted leaves from the fall. A quarter inch and half inch compost. Then we have a small and large mulch. Everything is sold back to the community. We do some wholesale through a few area greenhouses that sell the compost that we bag but we’re not in an aggressive business mindset. That said, we do recognize that we’re now in position to contribute to the community in a much bigger way, both as a service and financially, so this year we will be able to explore all those options and that’s an exciting position to be in.”